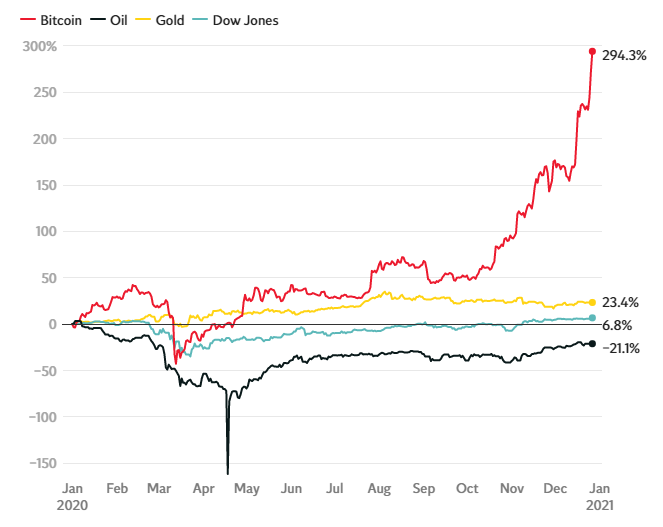 Bitcoin (BTC) has been widely referred to as a digital version of gold by traders and investors across the globe and with a rise in price of nearly 300 per cent in 2020, maybe the claims that the cryptocurrency could be seen as gold 2.0 could be warranted.

With a final quarter push seeing Bitcoin reach new record price heights of almost $30,000 (£22,000), significant interest and investment saw it trying to make a break for new levels after being traded for as little as $5,000 back in March 2020.

In a year in which a global pandemic shocked the world and its economy, Bitcoin saw significant investment as countries moved to print additional money, devaluing their own currencies as they looked to help their countries avoid ruin as millions were left forced to close their businesses, or unemployed as a result of the COVID-19 outbreak.

As investors looked for a new focal, Bitcoin’s association to being named as a digital form of gold meant that largescale investors deemed it as a suitable alternative to their traditional options, pushing BTC towards a third ‘great price rally’ that is has seen since its inception 11 years ago.

What caused the huge price increase?

With an economic crisis that has rocked the world following the pandemic, devaluation of fiat currencies has become a widely discussed topic as countries across the world began to print more currency against their national reserves, companies and investors have been looking for a potential alternative without the loom of the government’s actions resulting in further stunted growth of capital.

As Bitcoin is known to be decentralised, peer-to-peer electronic cash, it has been identified as a potential ‘safe-haven’ in which to store their funds, despite a wildly volatile market that has already seen a tough market previously over the past 3 years.

Said to be a suitable alterative to gold, some calling the cryptocurrency ‘digital gold’ meant that a staggering bull-run which saw the finite asset push a new all-time price high, it has become apparent that with scalability and further potential growth could result in BTC increasing their market cap even further, thus increasing the price of each coin held.

How many BTC coins are there?

One of the reasons that Bitcoin can held the level of price that it does at this time relates to the fact that there is a finite number of Bitcoin available, with only 21 million units only ever going to exist.

The fact that no additional units can be created after that number results in a protection against artificial inflation such as quantitative easing.