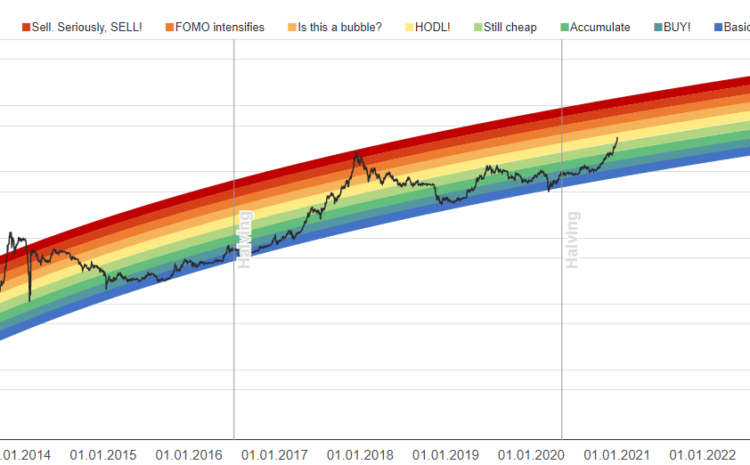 Bitcoin has once again broken its all-time high pricing stance and with demand for the cryptocurrency firmly within a bullish market, alongside added purchasing pressure from institutions, it looks like the cryptocurrency could be set for another price increase.

We all know that cryptocurrency is a volatile market and as prices climb, there is always the potential for those prices to fall as resistance begins to form, holding the price towards a slightly more sustained pricing index.

However, looking at historic data of bitcoin and the trends in which it has followed previously within a Bitcoin Rainbow Chart shows that we could have just been handed one of the biggest bullish signals ever.

Looking at the chart shows a pattern of index for bitcoin prices and shows that as upward movement passes through the yellow ‘HODL’ band, historically the price of bitcoin has continued to climb, resulting in previous all-time high prices within months of passing into that sector.

Firm interest and adoption of bitcoin as a viable investment for larger scale institutions in recent weeks has been buying demand at unprecedented levels and should see the trend once again continue to raise into the higher banding of the chart.

If this is the case this time around, hitting the highest possible ‘Maximum bubble territory’ indicator zone of red would result in bitcoin prices reaching and estimated $118,000 per bitcoin level.

Bitcoin has been banded as a possible digital replacement for gold staking, becoming know as ‘gold 2.0’ and while protected from hyperinflation, we could see more companies looking to underwrite themselves through their BTC holdings in the coming times.

Predictions for where bitcoin could reach in terms of value over the next 10 years point towards a possible $400,000 – $500,000 price point by 2030, however in the more present future a climb to $100,000 a bitcoin would put it in line with predictions recently made by the likes of JP Morgan Investments, who publicly said they thought that the price could reach $200,000 by this time next year.

Many thought that talks of a $30,000 bitcoin price by January 2021 was out of the question but just three days into the year, we are seeing bitcoin reaching prices over $34,000 and with limited resistance and high buying interest, that could continue to rise.